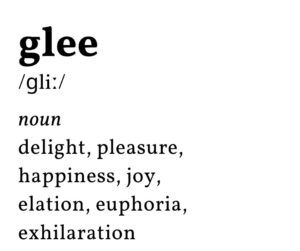 As lots of you know it’s Glee Club’s fifteenth birthday this year (look, not the best year for a celebration but stay tuned as I’ve still got my fingers crossed that we’ll fit a proper party in yet!)

When I started Glee Club it was because lots of people had said to me that they would love to be in a choir but they simply couldn’t make the commitment. Lots of choirs, quite reasonably, demand a high level of attendance at rehearsal and often lots of other things like uniforms or selling fundraising chocolate and raffle tickets.  I wondered whether there was a way to give people the joy of group singing without all the attached hoopla.

Glee Club seemed like the perfect name because it traditionally described a choir that wasn’t attached to religion or the church and also had that wonderful word Glee to give the whole thing a sense of fun. What I didn’t know was that TV executives in the US also liked that word Glee and would soon be naming a hit TV series with it.

I guess that’s made it a little harder to explain to people that we’re not an all-singing and all-dancing show choir with a hot male teacher at the helm. We’re more a wine-drinking pop-song and show-tune loving random assortment  who love to sing with no strings attached!

After quite a few years of successfully running our weekly singalongs with Glee Club, I started having another conversation with some of the regulars where they wanted something more. They wanted to practice songs and perform them. Thus Glee Plus was born.

I still wanted to keep some of the fundamental ideas of Glee Club even with this new addition to the family. So even though people sign up for a 10 week season and commit to learning the songs for the performance, we still free them from some commitment as it doesn’t matter if they miss the odd rehearsal. We send out a round up email each week of everything we covered and we ask that people catch up on their own time if they’ve missed the session. As a choir leader, this sometimes takes an extra dose of patience on my part as it would be lovely to have all of the people there all of the time but I console myself with the thought that I love the type of people who join Glee Plus: intrepid travellers, busy professionals and people with busy and active social networks. If this means they miss rehearsals sometimes, so be it – they’re my people!

How to keep the no solos rule? Well, we sort of turned it on its head. Instead of no solos, we have a rule where if you want a solo then you get one! So there are no auditions, everyone who wants a solo puts their hand up and I make sure everyone gets one – even if that means adding in songs or inventing solos where there never were any!

And of course over the last year we’ve been trying to find new ways to add the word Glee into all of our new babies’ names: we’ve got Glee West for our branch in Yarraville, Glee Bayside for our newborn branch in Brighton (it had only just launched before the pandemic hit) and Hobart Glee Club. And we’ve got a new offshoot called Song Club which is a little different from the Glee idea because it’s for people who would like to develop their solo singing in a supportive environment so it got the other half of the name – no Glee but a Club.

Sometimes I wish I’d come up with something different fifteen years ago, oh you know like say, Pub Choir (!) but if there’s one thing we’ve all learned this year, you can never know what the future holds for you or the name you choose for your choir. And ultimately I like that we have a name that is synonymous with joy, delight, pleasure, happiness and euphoria. Because that sums us up!

If you’re looking for trouble...then come to our Elvis singalong! 7pm Brighton Beach Bowls Club tonight. Grab a ticket online or at the door: trybooking.com/BWBGD

A  new Glee Club in Point Cook and we're paying tribute to Judith Durham in the CBD tonight! - mailchi.mp/e86d415be…

It’s our Carole King singalong tonight at Fringe Common Rooms (in Trades Hall). Book online or rock up at the door. Doors open at 6:30 and the singing kicks off at 7. We know it will put a smile on your face!

Geelong friends, we are singing ABBA today at 5pm at Beav’s Bar. Come along a few mins early, grab a drink and a ticket and join in!